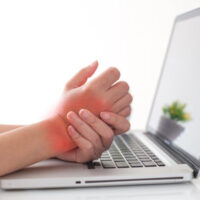 When one thinks about workers’ compensation for injuries suffered on the job, one tends to think about sudden injuries. However, the most common work injuries, and the ones that cause the most work absences, are repetitive stress injuries (RSIs), also referred to as musculoskeletal disorders (MSDs). The U.S. Bureau of Labor Statistics (BLS) estimates that around one-third of all work-related injury and illness cases involve an RSI. If you believe that you have a RSI, know that you are entitled to seek workers’ compensation for your injury, but it may be slightly more difficult to collect than it would be for a sudden accident.

RSIs Are Compensable In Florida

While a few RSIs are very common, such as carpal tunnel syndrome and bursitis, there are several that can affect the average worker. Some include tendonitis, dystonia (“writer’s cramp”), DeQuervain’s syndrome, and others. Depending on the industry, certain work-related RSIs are more likely to develop than others; for example, carpal tunnel or cubital tunnel syndrome are more likely to occur in white-collar office workers than they are in, say, manufacturing employees.

In many states, repetitive stress injuries are not considered compensable by workers’ compensation coverage, but Florida’s Supreme Court has ruled in the past that RSIs can fall under workers’ compensation. Those with RSIs must show two things in order to potentially receive compensation: (1) prolonged exposure to potentially repeatable trauma (minor or not); and (2) that the cumulative effect of that bodily trauma resulted in injury. It used to be necessary to show that the injured worker was exposed to a higher level of exposure to trauma than the general public would face, but this is generally not required nowadays.

Work Must Be The Major Contributing Cause

While RSIs are generally compensable in Florida if the criteria are established to the satisfaction of the relevant authorities, it is still important to keep in mind that the majority of the damage to your body must have occurred as a direct result of work. This is a concept known as major contributing cause, and while it is fairly self-explanatory – namely, Florida law holds that the RSI must be more than 50 percent of the cause of your symptoms – it is not always easy to demonstrate the fact.

If you need medical treatment due to an RSI, and you believe that your work is the major contributing cause of your condition, one of the best things you can do is to consult both a physician and a workers’ compensation attorney as soon as possible. Florida law requires that you report a work-related injury to your employer within 30 days of an accident (or after a diagnosis of an RSI), but it is always a good idea to seek medical treatment and report the injury as quickly as possible. Getting a confirmed diagnosis can help establish conclusively that you are entitled to compensation.

Injuries sustained at work usually fall under workers’ compensation coverage, with rare exceptions. If you have acquired an RSI due to years of repetitive motion, you have the right to seek the coverage you are entitled to while you recuperate. An Orlando workers’ compensation attorney from the Hornsby Law Group can help you clarify your options. Call our offices today at (407) 499-8887 for a free consultation.