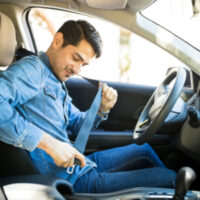 On October 30, a child and a 40-year old woman were killed on Northwest 100 Street in Marion County, after the woman lost control of her vehicle and struck a large tree. Two children were in the backseat of the vehicle, and neither were wearing seatbelts; the woman was unfortunately pronounced dead at the scene, while the children were taken to a nearby hospital. One of them passed away from his injuries, while the other child remains in critical condition as of this writing. Often, in these types of crashes, the issue of seatbelt use becomes an issue, but in Florida, it may or may not have any bearing at all.

Florida has laws that mandate seatbelt use when driving or riding in a passenger vehicle, with violations being punishable by a fine. Generally, anyone in the front seat or anyone under 18 who is riding anywhere in the vehicle must, by law, be wearing a seatbelt (or, if a child is too young, they must be riding in an approved safety restraint device like a carseat). An adult driver can be cited if a minor child is not wearing a seatbelt at any point, but this is also punishable with a fine.

In the Marion County case, had everyone survived the accident, the woman might have been cited because neither child in the backseat was wearing a seatbelt. Florida has a vested interest in working to eliminate road fatalities in the state, and a failure to wear a seatbelt has been demonstrably linked to higher injury and fatality rates in road accidents – on average, slightly less than half of those who died in road accidents were shown to not have been wearing seatbelts. One wonders how many might have survived.

If someone is not wearing their seatbelt at the time of a crash, a defendant can sometimes use that fact – not as a way to have a case dismissed, because a seatbelt is not likely to entirely prevent a crash, but as a way to potentially have their damage liability reduced. An injured plaintiff who can be shown to not have worn their seatbelt at the time of the crash will not be barred from recovery under Florida law, but it is very possible that any award they receive will be less than it might have been.

This is due to a concept referred to as comparative negligence. Florida’s concept of comparative negligence holds that if someone is found to be partially negligent in causing their own injuries, their award will be less because no one should recover for injuries they caused themselves. Florida case law also holds the same thing; evidence of not wearing a seatbelt can be brought up when trying to defend oneself from an accusation of negligence. If you have this issue, an experienced attorney can make a huge difference in whether you prevail at trial.

Being in an auto accident is a serious, often life-changing event, and if you have been through one, your wearing or not wearing a seatbelt may ultimately affect your award, but it should not affect the validity of your underlying claim. If you have any further questions about your case, calling an Orlando car accident lawyer at the Hornsby Law Group can help to get them answered. Call us today for a free consultation.