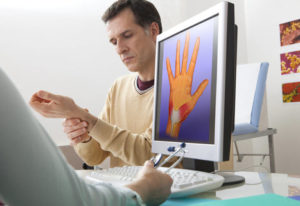 Some of the most common workplace injuries are repetitive in nature, especially for white-collar workers. Repetitive stress injuries (RSIs) is actually a catch-all term designed to cover several different conditions, but regardless of one’s actual diagnosis, an RSI sustained at work can severely hamper one’s ability to do their job. Many are unaware that RSIs can be covered, in full or in part, under workers’ compensation insurance.

RSIs are defined roughly as musculoskeletal disorders that are caused by cumulative, or repetitive, stress on the various muscles used to do a specific job. U.S. Bureau of Labor Statistics data show that carpal tunnel and other RSIs are the most common cause of days away from work, with fractures being the next most common. There is some stigma against those who claim RSIs in many fields, with many sufferers being accused of exaggerating, but it can be a very real and debilitating condition.

It is also not only white-collar workers that develop RSIs, as is the popular perception. It is quite common for those in the construction field, for example, to contract tendinitis or myofascitis, due to the repetitive motions required to perform their jobs. Regardless of the field, most employers do cover RSIs under their workers’ compensation policies. It is also fairly simple to diagnose, with visible symptoms like swelling, bruising and skin or tissue damage.

While many RSI cases will be fairly straightforward, this type of workers’ compensation claim is unusually prone to being questioned due to its correlation with preexisting conditions. In other words, repetitive stress injuries are often written off as being caused by factors outside the workplace. It can be extremely difficult to actually quantify how much of an RSI has been caused by work-related stress and how much has not, and as such, sometimes an insurer will try to use this as a reason to force a settlement.

In Florida, the law states that the alleged preexisting condition must be the “major contributing cause” of the condition (or the need for the condition to be treated), or it cannot be covered by workers’ compensation. You will likely be asked to present evidence to show that your condition was exacerbated by work stress, such as medical records from before and after you began the job in question. The law used to merely hold that an employee had to show that a condition “predisposed” them to disability, but now, it must be shown that the condition was at least 51 percent of the reason why a worker might need medical treatment.

Any kind of injury that happens on the job can, at least in theory, render you eligible to receive workers’ compensation. However, enlisting an experienced legal professional can help clarify any questions you might have about the process. The dedicated Orlando workers’ compensation attorneys at the Hornsby Law Group have significant experience in this field, and are happy to help you with your case. Contact us today to set up an initial appointment.