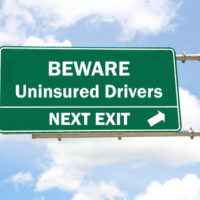 Most of the time, when an auto accident occurs in Florida, the drivers involved exchange insurance information, and the affair is handled from there. However, in some instances, a motorist may have no auto insurance, or not enough. They are referred to as an underinsured or uninsured, and while it can be difficult to receive compensation for your injuries from such a person, it is still possible.

At one point, Florida boasted the highest number of uninsured and underinsured motorists in the United States, at approximately 23 percent of all drivers on the road, despite Florida’s law requiring certain levels of coverage; $10,000 per personal injury protection (PIP) and $10,000 in property damage. This level of coverage can seem quite high, especially for those coming from other states, but proponents see it as a positive since most accidents can be handled by insurers this way, rather than going to court.

There are several reasons why a motorist might be uninsured or underinsured, in addition to simple poverty – they may have moved recently from out of state, and many other states do not mandate such a high level of coverage in auto policies. Others simply do not see any reason to buy so much insurance, thinking they will never be caught shorthanded. Either way, if someone who is uninsured or underinsured is involved in an accident with your car, it can cause significant problems, given that Florida is a no-fault state in terms of auto insurance and thus collecting compensation from the other driver (rather than from their insurer) can be quite difficult.

What Are My Options?

If you wind up involved in an accident with an uninsured or underinsured driver, you have two options in most cases. The first is to try and collect your damages from your own insurer, rather than the other driver’s. This is actually fairly common if your damages are negligible (that is, if your own insurance coverage is enough to pay the relevant bills). However, if your accident was more severe, or you are incurring costs that eclipse the amount of insurance you carry, this option will not be sufficient. Some motorists in Florida choose to carry uninsured motorist coverage – an extra policy of sorts – to help guard against this outcome.

The second option is to file suit against the at-fault driver. Normally Florida is a no-fault state, meaning that it is not possible in most situations, but there is an exception in the no-fault rules which permits suit if permanent injury or loss of bodily functions may result. If this fits your case, you would bring suit under a theory of ordinary negligence, and if your suit is successful, your judgment can be presented to the Bureau of Motorist Compliance – at that point, the judgment must either be paid off or the at-fault party’s license, registration, and tags will be suspended for 20 years.

Auto accidents are frightening incidents that can be life-changing. If the other driver lacks the insurance to help compensate you for your damages, you need a knowledgeable attorney to help you seek out other options. The Orlando car accident lawyers at the Hornsby Law Group are dedicated professionals who will work hard for you. Call our office today to set up an appointment.